Guinea’s President Alpha Conde has promised to fight corruption as he took an oath of office to serve a controversial third term.

At a swearing-in ceremony held in Conakry after his victory in the bitterly-contested October 18 presidential elections, Conde said he planned to govern the West African nation of nearly 13 million people in a different way.

“During the last two mandates, I noticed that the poor anonymous people in villages were abandoned by ministers and senior civil servants,” Conde said in a speech to the dozen assembled regional heads of state and governments.

Guinea witnessed sustained economic growth during Conde’s decade in power thanks to its bauxite, iron ore, gold and diamond wealth, but few saw the benefits. Unemployment remained high while power cuts and protests were frequent.

“We need to change our practices,” Conde said. “We are committed to fighting corruption. We want to govern differently. This means that ministers must put themselves at the service of the people and not their families.”

Conde added that ministers, their wives and children will have to declare their wealth while companies linked to ministers and senior civil servants will be excluded from government tenders.

Obliging relatives to file wealth declarations is a new tactic, but it is not clear if Conde has the political will to root out endemic graft which has led Guinea to rank 130th out of 180 countries on a global corruption index by watchdog Transparency International.

Conde decided to seek a third term after a constitutional reform in March allowed him to reset the clock on a presidential term limit. That led to violent protests in which dozens of people were killed before and after the election.

The 82-year-old will begin his third term in office on December 21. 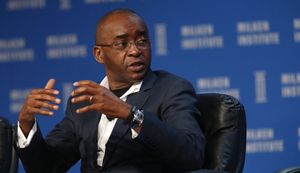 
Netflix appoints Zimbabwean billionaire Strive Masiyiwa to its board