Nigeria’s leading banks, Access, has been trending on social media platforms, but not in a positive way.

Customers of the bank across Nigeria were up in arms, at least verbally, calling out what they described as “theft” of their bank savings in the name of stamp duty.https://twitter.com/p_mystic/status/1277157739052126208?s=20

Even though Access Bank was not the only bank which has caught flack over the excessive charges of stamp duty to their accounts, it was the only bank which did multiple deductions within the same day.https://twitter.com/t_craftz/status/1277162408033824770?s=20

The bank’s rationale was that these were stamp duty that had not been deducted on past transactions.

The deductions saw customers’ accounts been debited with various sums of money. For some, it was as little as a few hundred naira but for others, thousands.

Few days later, the uproar was so much that the bank reversed the deductions and explained that it was a government directive but that the bank has decided to pay the stamp duty on customers’ behalf.https://twitter.com/myaccessbank/status/1277573359002423296?s=20

In September 2019, the deduction was extended to all PoS transactions from N1,000, a controversial move that was heavily criticised and then suspended due to the fact that it negates the drive to make the economy cashless.

These are all parts of the Nigerian government’s efforts increase its revenues through taxes.

But the implication of this only became clearer for many Nigerians when the government revealed on Wednesday that it generated $170m from stamp duty in five months.

The Chairman of the Federal Inland Revenue Service,

Muhammad Nami, said that amount represent about 1,000 per cent increase when compared with $17m collected from January to May 2019.

“The introduction of the FIRS Stamp Duties Adhesive Stamp will, among other things, plug the revenue sink-hole, enable proper accountability and transparency, simplify administration of Stamp Duties and reduce disputes,” he said.

In fact, the Nigerian government believes that the stamp duty would be central to the country’s revenue drive that it would be second only to oil revenue, according to the Secretary to the Government of the Federation, Mr. Boss Mustapha.

Nigerians are directing their angers towards banks collecting this tax on behalf of the government. Unfortunately, there would be little they would be able to in the way of challenging its legality as the stamp duty is now enshrined within the Finance Act 2019. 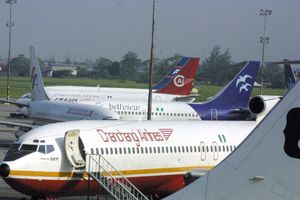 
Passengers to bear brunt of COVID-19 impact on aviation industry