Nigeria’s inflation sharply rose to a three-year high in November as food prices increased due to dollar shortages, insecurity in farmlands, and supply bottlenecks fuelled by the COVID-19 pandemic.

According to the National Bureau of Statistics, consumer prices jumped 14.9% from the previous year, compared with 14.2% in October. The food index, which accounts for more than half the inflation basket, increased to 18.3% from 17.4% in the previous month, marking the highest rate since January 2018.

Costs of food in Africa’s largest economy rose 2% in November, further pounding challenges on an economy that hit a 33-year high recession, which the World Bank estimates will push an extra 6.6 million Nigerians into poverty.

President Muhammadu Buhari’s directive to restrict dollar access for food and fertilizer imports has driven traders to the parallel market for foreign exchange, where they pay a lot more.

In imposing the order, the government argued it will boost local production, but it has raised costs for importers and added to upward pressure of food prices.

Increased attacks on Nigerian farmers has pushed down food reserves, raising the price of key staples.

Annual inflation has remained above the 9% top of the central bank’s target range since 2015, and the rate could remain in double digits unless authorities reform monetary policy to focus on price stability, the International Monetary Fund (IMF) said last week.

However, the central bank said at its November rates announcement where it held borrowing costs, that the upcoming harvest and recovery in domestic production should ease food inflation.

Finance Minister Zainab Ahmed said, “Nigeria will open its lands borders very soon.” Raising hopes that the blockades that have been in place for more than a year and added to supply constraints may be lifted at some point. 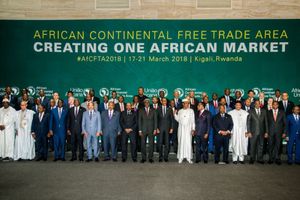 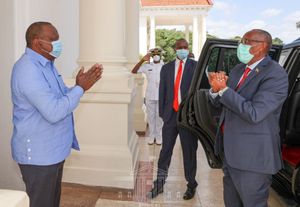