Eskom, South Africa’s major power utility, trimmed its net loss to $1.3 billion in the 2019/20 financial year, though it projects a larger loss in the next financial year owing to the financial impact of the coronavirus pandemic.

But that was countered to some extent by higher coal and debt servicing costs, and the company expects an economic recession and uncertainty due to the pandemic hurting electricity sales.

The firm often struggles to power Africa’s most industrialized economy, and is heavily reliant on government bailouts.

Those debt burdens place the country’s wider economy at risk though Eskom hopes to be profitable in the year to March 2023, a results presentation showed.

He said Eskom was aiming for cumulative cost savings of $3.8 billion by 2023, but that those savings alone would not be enough to save the utility’s finances. “Eskom needs further electricity price increases and lower debt to ensure long-term sustainability,” Cassim added.

Chief Executive Andre de Ruyter said there could be about $12.4 billion of “green financing” potentially available, as the company looks for ways to cut interest payments.

De Ruyter has previously said Eskom is in talks with development finance institutions about funding linked to accelerated decarbonisation. 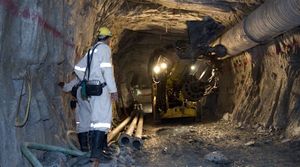