Tanzanian President John Pombe Magufuli has requested China to forgive some of his country’s debts, including one incurred 50 years ago for the construction of the railway that runs from the commercial capital Dar es Salaam to neighboring Zambia.

The Head of State has made similar requests to other creditors in the past. In April 2019, he asked international lenders like the World Bank to cancel debts to African nations to provide them with fiscal room to battle the economic effects of the coronavirus pandemic.

Magufuli presented the request to visiting Chinese Foreign Minister Wang Yi, as the two witnessed the signing of a deal for the construction of a 341 kilometer rail line by two Chinese firms.

“He will get our request to China so that they can see how they can forgive our debts because according to their concession laws it is very difficult to forgive debts,” the president said.

He did not say the total amount of outstanding debt he wanted forgiven by China.

Tanzania spends about $300 million every month to service its debts, with close to $80 million going to the World Bank, Magufuli said last year.

Last week, DR Congo’s foreign ministry announced that China had agreed to forgive some of its debts.

Under the terms of the agreement, Congo will no longer be mandated to repay its interest-free loans from China that matured at the end of 2020.

China is a close economic partner of Tanzania and Magufuli asked the Chinese government to consider funding the construction of a section of its planned new modern rail.

China has extended debt relief worth over $2 billion to developing countries under a G20 framework aimed at giving those hammered by the COVID-19 crisis some financial breathing space.

President John Magufuli won his re-election bid in October last year under a platform of continued infrastructure development as he seeks to build an industrialized nation. 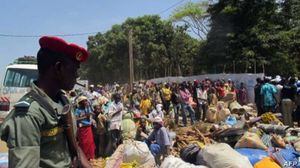