But most people, even his critics, admit that such comments that often sound irrational, threatening, outside the realm of reality, and belonging to a drunk man who’s had seven rounds at the bar, are laced with some deep truths.

Especially when he speaks of matters that he rarely talks of.

On Friday, Trump announced to reporters at the Oval office that “Egypt would blow up Ethiopia’s dam.” He further added, “The dam shouldn’t have been built in the first place.”

Those words echoed propaganda and comments that have been spoken before by various Egyptian leaders across the political divide.

The issue in question is a dam. And who controls the river its built in.

For years, Egypt has been the so-called custodian of the world’s longest river. In 1929, Egypt and Britain signed the Nile Waters Agreement. Britain signed as a representative of Uganda, Kenya, Tanganyika (now Tanzania) and Sudan, its colonies at the time. The deal recognised Egypt’s right to the waters of the Nile as well as the right to veto any irrigation projects that would affect its share of the river’s water.

In 1959, Egypt and Sudan signed another accord that supplemented the previous agreement. It gave Egypt the right to an annual share of 55.5 billion cubic metres (66%) and Sudan 18.5bn cubic metres (22%). Ethiopia was not consulted.

Britain benefited from the agreement as it was, at the time, taking advantage of Egypt’s water-intensive crops, including cotton.

The North African country took the deal in stride and built the Aswan High Dam in 1960s, which is until today the world’s largest embankment dam. It generated around half of Egypt’s electrical power at the time, but this mega-dam also triggered the gradual decline of the Delta’s ecosystem.

The Nile flows from south to north over 6,695km from its first tributary – the Ruvyironza River in Burundi – before emptying into the Mediterranean Sea. The Nile Basin, which is a network of connected ecosystems, spans 11 countries: Burundi, Rwanda, Tanzania, Kenya, the Democratic Republic of the Congo, Uganda, Ethiopia, Eritrea, South Sudan, Sudan and Egypt.

The river consists of two main tributaries known as the White Nile and the Blue Nile. These rivers meet at the Sudanese capital, Khartoum. From there, the unified river is joined by the Atbarah River before reaching Egypt in the north.

The Nile is the only river that crosses through five distinct climate zones. Scientists believe the river to be between 20 and 30 million years old.

In its current form, it is considered the oldest and longest river on the planet. It contains more than 100 islands, Egypt being home to 22 of them. Although the river is long, compared to other major rivers it is considered very slow. It is estimated to take up to three months for water to flow from Lake Victoria in the south to the Mediterranean Sea in the north.

And in 2011, as Egypt was undergoing a revolution that toppled longtime dictator President Hosni Mubarak from office, Ethiopia began building its Grand Ethiopian Renaissance Dam (GERD) on the Blue Nile.

The GERD, a 1.1-mile-long concrete colossus, is set to become the largest hydropower plant in Africa. Across Ethiopia, poor farmers and rich business executives alike eagerly await the 5GW of electricity officials say the dam will ultimately provide. Yet as thousands of workers toil day and night to finish the project, Ethiopian negotiators remain locked in talks over how the dam will affect downstream neighbors, principally Egypt.

The two countries — as well as Sudan, also heavily dependent on Nile water from Ethiopia — have tried in vain for years to forge a deal on how quickly the dam’s reservoir should be filled. Egypt, anticipating droughts, has demanded that it be filled slowly, over more than a decade. Ethiopia, which built the dam largely with its own money, wants the reservoir full and generating the maximum electricity as soon as the dam is completed in 2023.

Talks in Washington D.C. have collapsed as the Ethiopian negotiators pulled out in June alleging that Egypt was dragging the negotiations to buy time. As a result the Eastern African nation began filling the dam during the summer.

But the dam issue shouldn’t be that controversial.

Ethiopia, Africa’s second most populous country, suffers from a dearth in electricity. Only 17% of its 110 million citizenry is connected to the national grid, compared to Egypt which has 100% electricity connectivity for its 100 million citizens. The lack of electricity has led to hundreds of thousands fleeing Ethiopia to search for a better life abroad.

While the nation has witnessed a rapid economic growth to overtake Kenya as the region’s largest economy (albeit due its size- with more than twice the population), there is still high unemployment and poverty rates of 60% which don’t make good reading.

Girls in rural areas, where more than 80 percent of the country lives, are expected to fetch firewood for cooking, precluding millions from going to school.

The Ethiopian government believes the dam is nearly a cure-all to all those problems. And they are right.

The Ethiopian Investment Commission says that 5,700 foreign companies would draw on power created by the Renaissance Dam, many of them in a burgeoning industrial corridor that stretches from Addis Ababa to the boom town of Adama. A $5 billion new airport is in the works between the two cities, already connected by a new six-lane expressway and electric rail line.

“The dam’s power will also help with similar problems in Sudan, Kenya and Djibouti, all of which are connected to Ethiopia’s grid and will begin importing power from it in the coming years.”

The dam is so vital for Ethiopia’s present and future, and Prime Minister Abiy Ahmed maintains they will defend it at all costs.

In May 2018, Ethiopia purchased Israeli made Spyder-MR air defense systems which can simultaneously fire two different types of missiles, to shield its Grand Renaissance Dam. One week later, installation of the systems at the dam was completed.

The Addis Ababa government opted for those defense systems after they performed well in the Indian-Pakistani clashes in disputed Kashmir region five months earlier. Ethiopia has been on a purchasing spree of defense equipment, spending more than $400 million last year in related purchases according to the Stockholm Peace Institute.

While Egypt has legitimate concerns over reduction of the waters it will receive, the type of dam Ethiopia is building is a hydroelectric dam. Moreover, they have access to two different sea water sources (Mediterranean Sea and Red Sea) which can be desalinated to supplement the current water sources.

Neighboring Israel, with similar desert climatic conditions, gets 85% of its domestic water supply through seawater desalination, selling surplus to other neighboring Jordan. President Sisi’s government, should, and have already began exploring the options of desalination, which landlocked Ethiopia doesn’t have the luxury of.

Neither does it have oil and natural gas resources Egypt has.

In a statement Gedu’s ministry said, “The incitement of war between Ethiopia and Egypt from a sitting U.S. president neither reflects the longstanding partnership and strategic alliance between Ethiopia and the United States nor is acceptable in international law governing interstate relations.”

He is right. The Grand Renaissance Dam should never be controversial. Gone are the days that Ethiopia could not use the waters flowing through its country. The new realities will be based upon a shared Nile where each country takes sovereign decisions in their best interests. 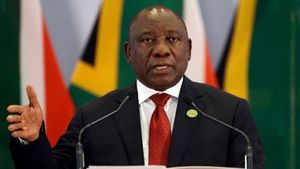 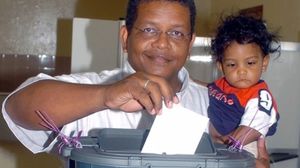