Why Kenya has increased its security budget in a pandemic year

Kenyan 2021-2022 national budget has increased allocation to the security sector by Sh6 billion ($60 million), bucking a trend that has endured over the last decade.

According to the Sh3.63 trillion budgetary estimates presented to Parliament by the Treasury Cabinet Secretary Ukur Yatani, the government is planning to spend a huge Sh340 billion on internal security, up from Sh334 billion.

As a result the country is set to spend 9.4% of its total government expenditures on security, the second largest figure in sub-Saharan Africa, behind only Angola that experienced a 27 year civil war in the past.

Interestingly, CS Yatani slashed the budget for the military by Sh2 billion to Sh119 billion, a signal to the declining expenditure in battling terror and threats posed by Somalia based al-Shabaab militants. Kenya has also given a clear indication that it intends to withdraw from the war-torn Somalia, as relations between the two Eastern African neighbors remain fraught.

The allocation for the National Police Service has risen to Sh6 billion, while the budget for the Correctional Services (Kenya Prisons) has risen by more than Sh2.5 billion. The two budget items have been apportioned a total of Sh138.9 billion up from Sh132.7 billion in the current financial year.

It is puzzling that the allocation for national identity cards, which the government says are being phased out, has been allocated Sh900 million, similar to the concluding financial year.

The allocation to the security sector (Sh302.1 billion) exceeded that of education (202.9 billion), health (121.1 billion), transport (182.5 billion) and social protection (103.4 billion) despite growing youth unemployment driven by the restrictions to curb the COVID-19 pandemic and years of chronic mismanagement by state institutions. That has left a bitter taste in the mouths of the country’s largest demographic.

“There is now way we can justify allocating that much,” Nzaro Chai from the coastal city of Mombasa told Mansamedia.

Since President Uhuru Kenyatta came into power in 2013, budgetary allocations to the security sector have risen year by year, heightening fears of the establishment of a powerful security industrial complex at the expense of strengthening social welfare.

Kenya is not at war with any of its East African neighbors, and its presence in Somalia under the AMISOM mission is funded by the EU and its partners. Statistics from Kenya’s exchequer show grants from AMISOM amounted to Sh1.45 billion in the July-December 2020 period.

Conservative estimates earlier showed the international community pays $1,028 (Sh112,052) for each soldier in AMISOM per month. Their respective governments then deduct about $200 (Sh21,800) for administrative costs, meaning the soldiers take home about $800 (Sh87,200).

The EU funds cater for allowances for the AMISOM troops and police, international and local civilian staff salaries, operational costs of their offices, among others.

The U.S. has given Kenya Sh40 billion in counterterrorism aid over the last decade according to a report by the U.S. Congressional Research Service, a public policy research institute of the United States Congress. The country’s security agencies rank second to Egypt in the list of African states who benefit from support by Washington.

Kenya also hosts foreign military bases belonging to U.S. and its former colonial master U.K. unlike some of its neighbors i.e. Ethiopia and Tanzania.

Eyes on the upcoming poll?

Some have linked the increased security budget to preparations for the General Elections slated to take place in August 2021, which could necessitate the recruitment of additional officers.

“Kenya is the economic hub of East Africa, she’s debt riddled and any threat to its economic well being will spell doom to its sustenance. The government ain’t taking any chances, one slip up and we have another IDP problem that will cost billions to manage and an economic recovery plan that will cost trillions to execute,” Bugasu Omega, a legal practitioner said.

Post-election violence is not new in the country. 2007 marked the bloodiest year in the country’s history after ethnic clashes erupted following an indecisive election that the electoral commission said incumbent President Mwai Kibaki won. The violence claimed the lives of about 1,500 people and displaced half a million others. It sparked an investigation by the International Criminal Court.

Kenya also held a contentious poll in 2017 that sparked huge countrywide protests. Hundreds were killed by police officers in the ensuing chaos and the Supreme Court annulled the presidential poll, a first in the African continent.

A run off was held 60 days later even as massive protests led by former Prime Minister Raila Odinga rocked the country. Odinga boycotted the poll that Kenyatta won garnering over 90% of votes cast. However, voting failed to take place in large chunks of Western Kenya and in the Coast, due to the ensuing violence.

There are fears that similar election-related violence may take place as the upcoming election is set to be a high-stakes contest likely to pit Deputy President William Ruto, who has fallen with his party boss Kenyatta, against Odinga. 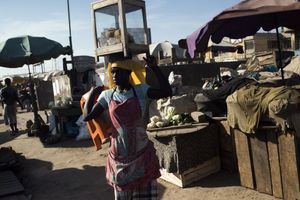