A looming power crisis is about to hit Zimbabwe after a surge in electricity imports from neighboring South Africa overloaded its network and caused generating plants to fail.

According to Energy Minister Soda Zhemu, the surge caused a nationwide blackout in the wee hours of Monday morning, as it affected output at the country’s main hydropower plant, Kariba, and the largest coal-fired facility, Hwange.

Despite the restoration of normal electricity generation at Kariba, Hwange is at 85 megawatts out of its installed capacity of 920 megawatts. “Demand is outweighing internal power-generation capacity,” Zhemu said.

Yeas of western sanctions and economic mismanagement by the former President Mugabe’s regime have made Zimbabwe reliant on energy imports from neighboring South Africa and Mozambique to meet local demand. Its main hydropower plant, the Kariba dam, produces 1,018 megawatts of electricity compared with a national consumption of at least 2,000 megawatts.

Businesses are now gearing to use diesel generators to run their operations. The country’s second largest city of Bulawayo also announced that water cuts could be rolled out across the city should the power crisis prolong.

“The water supply interruptions are due to the intermittent power supply being experienced citywide,” Christopher Dube, the town clerk, said in an emailed statement. Water pump stations have not received power supply since Monday evening, he said.

“This has negatively affected treatment of water, as well as pumping of both raw and clear water,” Dube said. 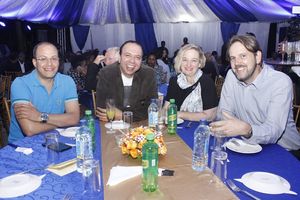 
The story of white privilege in Kenya's financial sector